Skoda Transportation Group presented its new E’City trolleybus at the CzechBus show in Prague. The all-electric bus can carry 69 passengers, 28 seated, and builds on chassis from Skoda’s Turkish partner Temsa. Their first customer is the Prague City Transport Authority (DPP).

DPP had ordered 14 E’City buses from Skoda Transportation Group and will use them mainly on lines 154 and 213, as reported. The first electric trolley bus should arrive in Prague before the year’s end, with the remaining 13 to follow in February 2022.

For technicalities – Skoda Transportation (and its subsidiary Skoda Electric) is not part of the Volkswagen Group (that’s Škoda cars) but belongs to the PPF Group of the Czech company Petr Kellner. Nevertheless, they share roots in the same way the luxury car brand Rolls-Royce and the eponymous manufacturer of aircraft engines before paths diverged.

To develop the new E’City bus, Skoda turned to Temsa, a Turkish manufacturer with ties to the PPF Group. Temsa manufactures the bus bodies in Turkey, While Skoda supplies the electric drive, including batteries and pantographs. They also assemble and test all vehicles at the Skoda plant in Pilsen, Czech Republic. For its part, Temsa had introduced two electric bus models in 2019. However, Zdeněk Majer, Senior VP for Sales at Skoda, clarified that Temsa’s role in developing the E’City was only subcontracted. “Based on the findings from previous projects, we proposed specific modifications to the existing solution that our sister company has for its vehicles, and thus the production of the bodywork took place in Turkey,” he explained.

Skoda Transportation has yet to disclose real-life performance data. However, the spec reveals a length of 12 metres and 2.55 metres width. Being 3.3 metres high designates the E’City bus as a low-floor bus with a 5.8-metre wheelbase. Propulsion comes from a 160-kW electric drive which can run at up to 80 kph. There is no information on battery capacity, but Skoda guarantees a range of “more than 100 kilometres over the entire service life of the battery.” However, as a trolley bus, the battery-electric range is secondary – the pantograph provides for intermediate charging throughout the journey with up to 150 kW, and Prague already has overhead lines for common streetcars. In addition, the vehicles can also be recharged by cable at night in the depot.

The battery also powers the air condition, and Skoda points to a modern passenger information system, a camera system for monitoring the interior, and automatic passenger counting.

As for operator DPP, the Skoda E’City is the first model the company will own rather than rent as they had done with other models during testing. The latter has been going on for some years and posed some difficulties in charging infrastructure, Petr Witowski, Chairman of the Board of Directors and CEO of DPP, explained. However, “We are operationally ready,” he added. In addition to overhead lines, the company has installed pantograph chargers at Strašnická and Želivského terminuses for the trolleybuses. 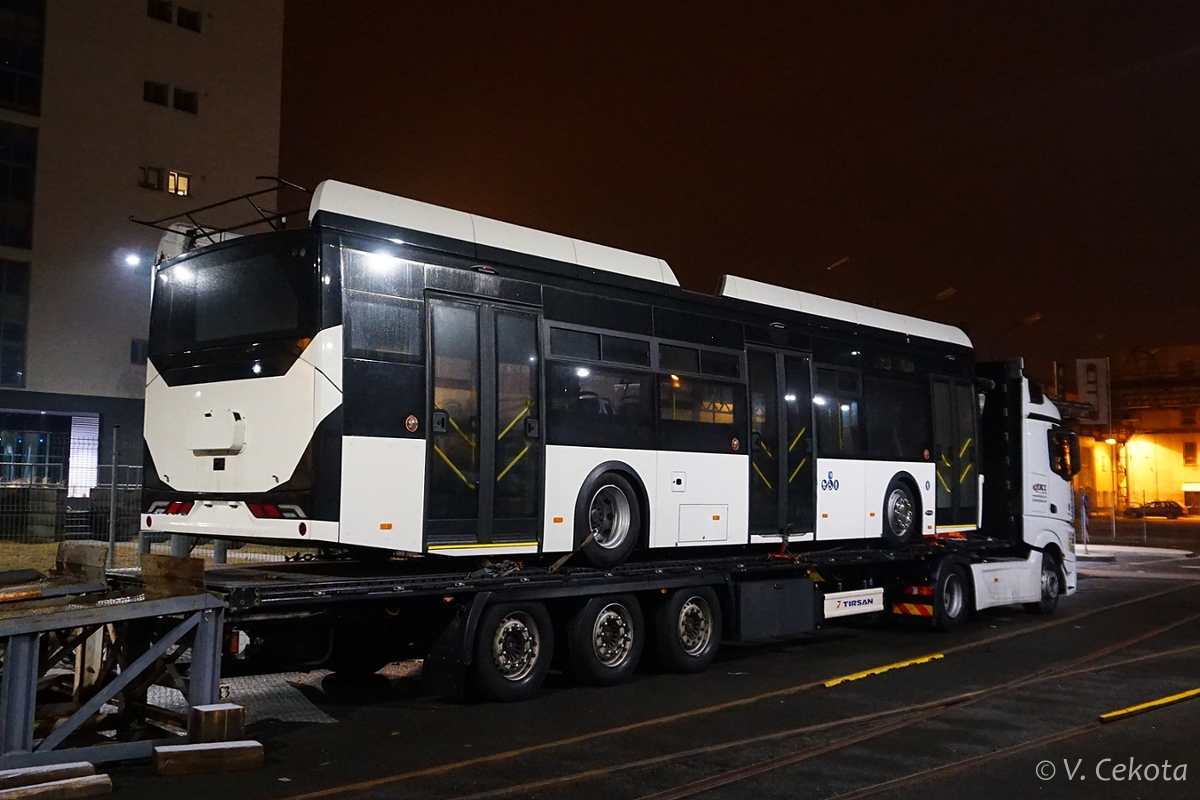 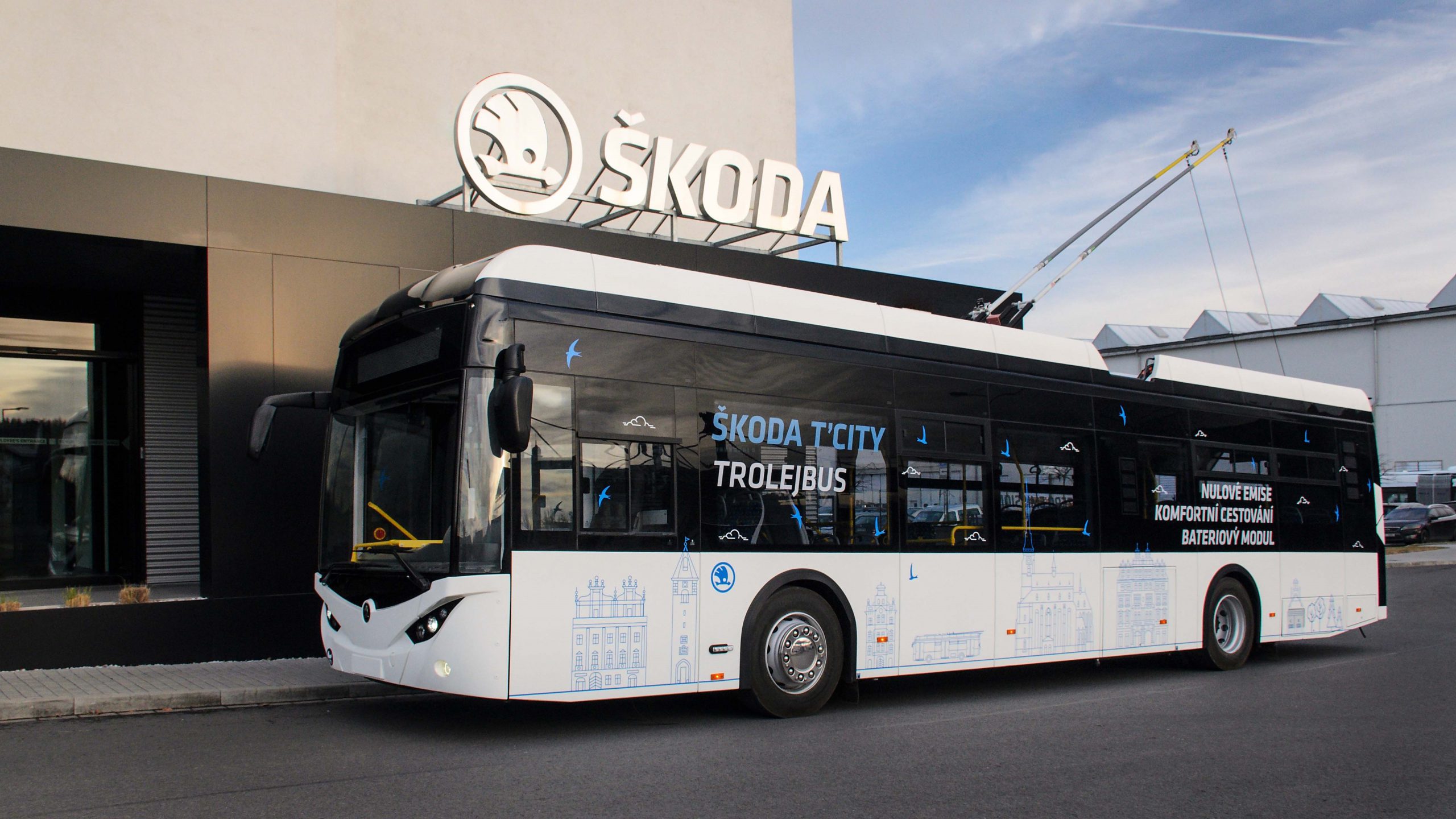 For the first time, Skoda Transportation has shown the final design of the new 36Tr trolleybus on its website. The first trolleybus with a body from the Turkish company Temsa should be in service next year. Skoda has previously announced that the 36Tr will first run in Ostrava. The vehicle will be tested in Plzen in the coming weeks.

This is a major change in business strategy: Skoda is ending its cooperation with the Polish Solaris to start making its own trolleybuses with bodies to be made by Turkish Temsa. Until now, Skoda has worked with bodywork manufacturers and supplied equipment.

Skoda was awarded the contract for eighteen hybrid trolleybuses for the Ostrava public transport company (DPO) at the end of last year, bidding as Ganz–Skoda Electric, a part of the Czech PPF Group. The tender was unusual in that four bids were received and the final price was one fifth lower than the estimate. The new trolleybuses should be in service from February 2023.

The project will be partly co-financed by the EU: DPO has received an 85% subsidy from the European Regional Development Fund under the Integrated Regional Operational Programme (IROP) for six vehicles. The new hybrids should arrive in Ostrava in three deliveries of six cars each. The first cars could begin operation in February 2023, the second delivery is expected by March 2023 and the third by May 2023. The new trolleybuses should completely replace the oldest series in the DPO fleet, i.e. the Skoda 21Tr.

The Skoda T’CITY 36Tr will carry 85 passengers, with 27 seats and one space for wheelchair users. The vehicle is air conditioned and equipped with USB ports and a camera system.